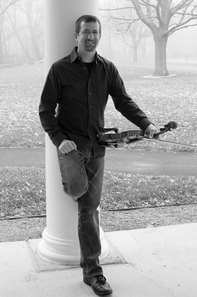 Jerry Loughney (fiddle, vocals, manager) is a self-taught fiddler, having won five Wisconsin State Fiddling Champion titles. He fiddled with the Lorentz Family Bluegrass Band for nine years, as well as Pike Creek and numerous other groups. He toured extensively throughout the United States and Canada with National Country recording artist, Kevin Sharp. While on tour with the Milwaukee Youth Symphony Orchestra, Jerry was invited to fiddle at His Majesty's Theatre in Aberdeen, Scotland. Other tours have led him to fiddle in Austria, France and Switzerland. On call as a studio musician, Jerry has recorded in many of the area studios, with styles ranging from Bluegrass to Western Swing, Polka, Alternative and Rap.

Jerry holds a Bachelor of Fine Arts Degree in VIolin Performance from the University of Wisconsin -Milwaukee and conducts a studio of violin and fiddle instruction. He is married to Andrea and they have two children-Liam and Brynn. 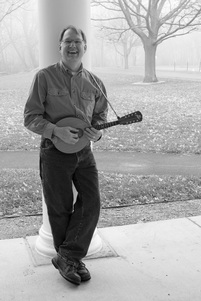 Bill Brenckle (guitar, mandolin, vocals) has been playing guitar for more than two decades and has been playing contemporary bluegrass guitar for over fifteen years. His backup work is marked by a subtle, solid rhythmic sense using mainly traditional chords punctuated at times with jazz voicings. His flat pick solo style alternates freely between strict adherence to the melody and improvisational use of scale patterns and "hot licks" borrowed from early country blues players. Bill also plays finger-style guitar, a solo guitar style which combines classic guitar technique with popular music styles. The repertoire includes traditional music from America and the British Isles as well as solo pieces by contemporary artists.

Bill received his Bachelor of Fine Arts degree in Guitar Performance from the University of Wisconsin - Milwaukee. He studied with John Stropes and Ben Verdery, and has participated in Master Classes with Doc Watson, Leo Kottke, and Pierre Bensusan, among others. Bill also studied with John Renbourn at Dartington College of Art in Devonshire, England. He has performed across Southwest England and continues to perform locally as a solo artist as well as with various acoustic music ensembles. He is featured on two CD releases entitled American Finger-style Guitar Circa 1999 and Never on Time.  Bill and his wife, Kathleen, a singer and player in her own right, live in Waukesha with their son Benjamin. 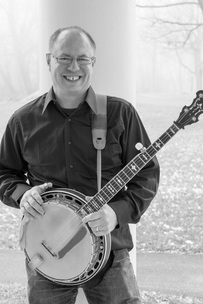 Jon Peik (banjo, bass, vocals) has been actively performing and recording with various bands in the Midwest since 1986. He first met Jerry when they played together in the Lorentz Family Bluegrass band while in high school . . . many years ago.

Jon played mandolin, banjo, and keyboard for 8 years with the Pitneys--a gospel band from the Rockford Illinois area and was a founding member of Madison's Nob Hill Boys who were featured on Garrison Keillor's A Prairie Home Companion.  You can currently find him performing with The North Country Drifters and occasionally with the BriarPickers and a few other configurations as well as with Above the Town.

Jon teaches banjo, mandolin, and guitar and runs bluegrass jam classes. He is a certified Wernick jam instructor and has worked with the Dane County Bluegrass in the Schools program. He is also the music coordinator at his church.